15 to Finish is a campaign that encourages students to take 15 credits per semester (or 30 credits per year) to graduate on-time (i.e., in most cases, two years for an associate degree or four years for a bachelor’s degree). Since its launch in 2012 as part of the Hawai‘i Graduation Initiative, 15 to Finish campaigns have been implemented by seven states at scale and an additional 120 institutions nationwide. An additional seven states have committed to launching campaigns in 2017.

Visit the 15 to Finish web site.

Campus teams from across the UH System attended an all-day workshop sponsored by Complete College America in September 2018 to learn about, discuss, and work on first year retention strategies. Content experts Tristan Denley and Loretta Griffy presented national best practices and lessons learned around taking 30 credits per year, refining academic maps, taking English and math in the first year, selecting a major in the first year. Academic mindset, a relatively new area, was touched on. UH data validated the key takeaway that all of these strategies work together to increase retention. The UH System’s HGI priorities for AY 2018-19 were also presented. 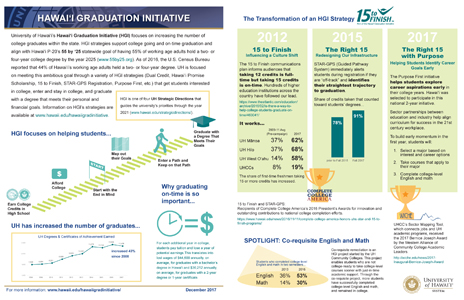 This update handout is formatted as one of UH‘s Leave Behinds for the state legislature.
Screen text version.

The University of Hawaiʻi, nationally recognized for its graduation initiatives, was one of six state entities that presented at the Complete College America (CCA) 2017 Annual Convening, the preeminent gathering of nationally-renowned architects of college completion efforts. More than 700 higher education leaders and advocates from around the country attended the three-day November conference in New Orleans, the organization’s largest convening to date. More at UH News.

New handout from Complete College America (CCA) with highlight on the University of Hawai‘i.

15 to Finish, A University of Hawaiʻi Success Story

The University of Hawaiʻi was honored for two of its graduation initiatives that are national models. Before an audience of 600 higher education leaders and advocates from around the country, Complete College America (CCA) announced that UH is the inaugural recipient of two President’s Awards at the national nonprofit’s 2016 annual meeting in San Francisco, California.

This handout updates the Hawaiʻi Graduation Initiative including new and on-going strategies.

The University of Hawaiʻi’s 15 to Finish campaign was one of two winners in the U.S. Education Delivery Institute’s (EDI) Access to Success (A2S) event. As an Inspired Deliverologist Expert Award (IDEA) winner, UH was credited for system-wide goals that have: